There is a shipwreck on the Nehalem, Spit in northern Oregon which Indian oral history says was a large ship that wrecked many years before American settlers came to the area.  The ship was carrying many tons of beeswax, in large blocks and candles, and many of the blocks have Spanish shipping marks.  The ship also carried a large and diverse cargo of Chinese porcelain wares intended for the markets in the New World, and the Beeswax Research Team was able to date the porcelain to the period between 1680-1700.  These facts indicate the ship was a Manila galleon, sailing from Manila in the Philippines to Acapulco, Mexico, with a cargo of Asian luxury goods. Our research has identified the galleon as the Santo Cristo de Burgos, which left Manila in July 1693 and was lost, its fate a mystery for over three hundred years.

What is the Beeswax Wreck?

One of the most popular mysteries of the Oregon Coast has been the identity of the “Beeswax Wreck” at Nehalem Beach, in Tillamook County.  Various researchers over time have identified it as either a Chinese or Japanese junk, a Spanish galleon, a Portuguese trader, or a lost English or Dutch pirate vessel. Based on more than 14 years of research, MAS researchers have been able to determine that the Beeswax Wreck was a Spanish galleon of the Manila-Acapulco trade. Nehalem Indian oral histories and the journals of the earliest traders in the area indicate that the galleon wrecked prior to European settlement and indeed most European exploration of the Pacific Northwest. Based on the results of intensive geological fieldwork conducted in partnership with Portland State University, the project team was able to determine that the galleon had wreck prior to the great Cascadia earthquake of January 1700, and that the tsunami that resulted from the earthquake scattered the shipwreck debris onto the Oregon coast

Archaeologists have recovered assemblages of Chinese porcelain sherds from nearby archaeological sites, including some which were modified into projectile points by the local Nehalem Indians. These sherds display design motifs indicating they were manufactured in China in the late 17th Century, and were intended for export to the European markets of Central and South America. Analysis of the design motifs indicates the majority of the porcelain was manufactured sometime between 1680 and 1700 AD.

Spanish archival records of the galleon trade list only one galleon sailing from Manila to Acapulco as missing during this time period: the Santo Cristo de Burgos, which left Manila in 1693 and was never seen by the Spanish again. We now know the ship wrecked in northern Oregon on the Nehalem Spit, far north of the regular Spanish shipping lanes and far from Spanish settlements. We also know, from Nehalem Indian oral histories, that some of the crew survived the wrecking and lived with the coastal Indians for some time, leaving behind descendants whose families continue to this day. 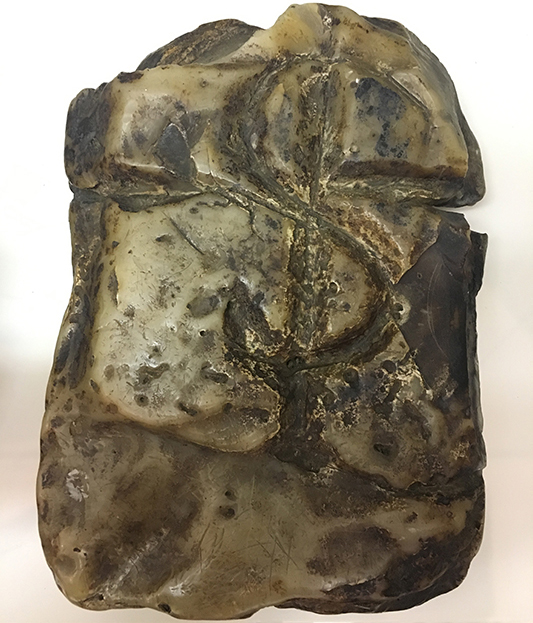 Beeswax with Spanish shipping mark. Courtesy of the Clatsop County Historical Society (on loan at the Cannon Beach History Center and Museum)